Burslem is one of the six towns that amalgamated to form the City of Stoke-on-Trent. The town was recorded in the Domesday survey as 'wasteland' but it is located on natural deposits of ironstone, clay, and coal - the essential raw materials for making pottery. By the end of the 17th century, Burslem was the country's leading supplier of pottery. It became known as the "Mother Town of the Potteries".

In 1710 there were 35 potbanks in Burslem, and it was very much a town, compared with Hanley and Stoke which were still villages. Leading potters began building houses and potbanks which reflected their prestige. Most notable was the Big House, built by the brothers Thomas and John Wedgwood in 1751 on the corner of Wedgwood Street and Chapel Bank. Most spectacular was the Fountain Place Works built for Enoch Wood in 1789, a gothic extravaganza between Hall Street and Packhorse Lane. During the 19th century, Burslem continued to grow as more potbanks were built. 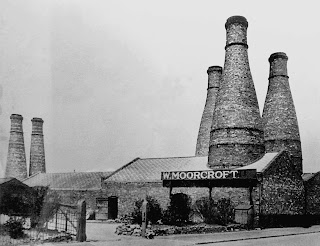 BOTTLE OVENS and KILNS STILL STANDING, COMPLETE WITH THEIR CHIMNEYS

This Victorian factory, called the Chelsea Works, boasts the only surviving 4-chambered muffle kiln in the world. It has been used to fire tiles and for firing decorated pottery.

The pottery is now renowned for producing regionally themed mugs, coasters and tea pots. It specialises in 'Stokie Ware' mugs and tea pots for the local area. 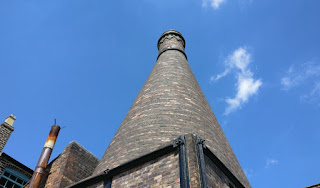 The muffle kiln was surveyed in 1975/76 as part 'OPERATION BOTTLE', the survey of the remaining bottle ovens of the Potteries. (More here)  At the time, the factory was operated by Mr. Joseph Szeiler, a Hungarian, who bought the works in May 1973 for £7000. His 'Studio Szeiler' produced tableware and giftware but specialised in animal figures which were modelled by himself.

Mr. Szeiler died in 1980 and in 1986 the current owners, Jonathan Plant and Adrian Tinsley, bought the factory as a going concern. In 1989 they changed the name to Moorland Pottery. https://www.moorlandpottery.co.uk/about-us.html 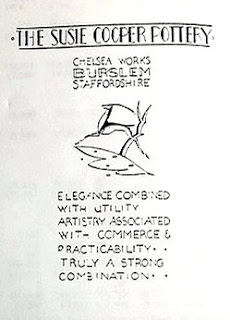 Her production reflected the tastes of the times with bright floral's, and geometric and modernist designs in bold hand painted colours.  She would have used this muffle kiln to fire her decorated pottery. The fireman was Jack Shufflebotham. She moved to a bigger factory, not far away, in August 1931.

MORE ABOUT THE KILN
Chelsea Works boasts the only surviving 4-chambered (2 up, 2 down) muffle kiln. One of two originally on the site.

The deed described the kiln as "a pair of four-mouth, double-deck kilns which had originally been designed for firing tiles, and the lessor (Doultons) agreed to "alter both bottom kilns to make them suitable for enamel firing, it being recognised by the lessees that there will inevitably be a small difference in temperature between the top and bottom heats, one of such kilns to be altered before the signing hereof and one kiln to be altered after the commencement of the term hereby granted, the decision as to whether such alteration has been satisfactorily carried out to be left to the arbitration of Mr Bernard Moore, whose decision shall be final conclusive and binding on all parties."

The kiln was therefore built sometime before 1930. It is technically complex with a latticework of flues emanating from eight firemouths (only four currently visible) carrying the hot gases from the blazing coal to the muffled firing chambers. The firemouths are of the 'hob mouthed' type.

The firing chambers were built using specially shaped, refractory bricks manufactured in Scotland. These bricks, with their 'THISTLE' branding impressed into the clay, were manufactured by Stein, at their Castlecary Fireclay Works, Castlecary, North Lanarkshire.


These technically-advanced silicon carbide refractory muffle bricks gave much better heat transfer and longer life than the usual fireclay blocks. The bricks were produced with 'tongue and groove' moulding on their edges to assist in construction and to help maintain clean air conditions within the muffle chambers.
Many thanks go to Mark Cranston of scottishbrickhistory.co.uk for information about the Thistle bricks

Middleport Pottery was built in 1888 by Burgess & Leigh Ltd., its founders were William Leigh and Frederick Rathbone Burgess. At the time of its construction the factory was described as a “model pottery" of the Staffordshire pottery industry. It was designed to make all production processes more efficient and to improve conditions for the workforce. Finished pottery was loaded (using the crane next to the packing house) straight onto barges on the Trent and Mersey Canal to take the pots north, to the coast, for export. The pottery still manufacturers Burleigh Ware. https://www.middleportpottery.org/  Now owned by UK Historic Buildings Preservation Trust.

Earthenware manufacturer. Large freestanding updraught hovel oven believed to have been built in 1888, when factory was built. One of 7 (maybe 9) originally on the site. This is a biscuit oven with 11 firemouths in its firing chamber is 18'6' internal diameter. Last fired in 1964 just before the deadline for the Clean Air Act.

"Established in 1842, enlarged in 1913, Furlong Mills Ltd., has become one the UK’s leading mineral processing companies. Sustained through a continuous investment programme in people, plant and machinery the company is able to meet the current and future demands of the ceramic industry." Furlong Lane, Burslem, ST6 3LE. https://www.furlongmills.co.uk/

Two flint calcining kilns complete with their chimneys still stand in 2019. In 1975 the kilns were surveyed under "Operation Bottle". These are some of the findings.

"These particular ones are certainly over 60 years old [in 1975] but we were unable to find anyone who knew the actual date of construction. Since they were built they have undergone two modifications. Firstly there has been an extension to the stack which we understand was originally some 12' lower. This may have been partly connected with a change of fuel from coal to coke but more likely was undertaken purely for social reasons. This work was carried out shortly after the First World War. Originally the upper loading doors were much smaller and these have been considerably widened to allow for more mechanical loading.

The [kilns] are in constant use and at the time we called we were able to see one which was being unloaded having completed its cycle whilst the other was firing. As previously mentioned these now work on coke which is mixed with the flints. It is believed that at present the coke originates from Shelton. When fully loaded each of these kilns takes 33 tons of flint and it takes 15 cwt of coke to fire this with a little bit of wood being used for the initial firing. Also during firing a steady draught through the firemouths is maintained by a blower regulated to give a slightly reduced draught during the initial lighting period.


It takes 39 hours to fire a full charge and firing commences at 5.00 pm on Day 1 and firing ceases and unloading begins at 8.00am on Day 3. The temperature during firing is about 950c."

The kilns stand 42 feet high, well below the minimum 60 feet specified by the regulations of 1877.

Unique in the Potteries - three downdraught bottle ovens. Originally built in about 1900, though present structures are 1937-47. Freestanding circular chimneys to downdraught ovens, tapering evenly to moulded tops. Originally surrounded in buildings and workshops. J & J Dyson PLC of Sheffield, acquired the entire issued share capital of Acme Marls Limited, a privately owned kiln furniture manufacturing company, for a total  of £1.89 million in July 2000. In 2018 the entire site was purchased and planning permission was sought to build housing and community facilities.

Six bottle ovens were known to have existed on the site. The remaining three were fired using oil as their fuel (converted after the Clean Air Act). The last time one was fired was in 1977, when the factory was owned by Acme Marls Ltd. The final temperature reached was around 1400C - much higher than for domestic pottery. The products being fired were refractory 'bats' or kiln furniture, used in the ceramics industry - refractory shelving for use in modern tunnel or intermittent kilns. Oven 'No.7' was fired in October 1977 before manufacture was transferred to its new site in the town. A ceremonial flaming torch was taken from the fire in oven No.7 to the new gas kiln at the new site.

Earthenware manufacturer at the Top Bridge Pottery, Longport, Burslem. Company founded in January 1962 from an amalgamation of Price Bros. (Burslem) Ltd and Kensington Pottery Ltd. Manufacturing ceased 2002.  http://thepotteries.org/photos/price/index.htm  Price & Kensington, along with the Spode factory in Stoke, is the earliest surviving example of a fire proofed building construction in the pottery industry. The remaining bottle oven is a freestanding, updraught hovel oven.

The site encompasses a range of buildings including the original mill, two bottle kilns (the rectangular-shaped kiln has two chambers) and stores. The kilns were adopted on a 99 year lease by The Staffordshire Pottery Industry Preservation Trust. The site is located at the end of Newport Lane in Middleport, approximately 1.5 miles west of Burslem town centre. The site lies adjacent to Canal Court, a development of waterside apartments. on the banks of the Trent & Mersey canal. The kilns were used for firing flint (prior to grinding and milling) which was added to the clay recipe to give better whiteness and strength.

Three kilns exist on site. One bottle shaped called 'Jumbo' with a capacity of 30 tons of flint. The other two share one rectangular chimney and they are called
called 'Middle and Office'. The capacity is 24 tons of flint, each. Metals doors close each firing chamber. They worked on a 3 day firing cycle. The ovens were built by Oliver & Sons in 1909 and last used around 1964/66 when the Clean Air Act came into full force.

In 1907 this mill was Goodwin's Mill Co. (Middleport Mill) used for preparing flint, and other potters materials. These are flint calcining kilns with two firing chambers. Alongside the Trent & Mersey Canal

The first pieces of fine art pottery from Moorcroft were created in 1897.  Designed by William Moorcroft, a graduate of what is now the Royal College of Art in London, his new art pottery was very popular from the outset and stocked by such prestigious stores as Liberty of London, Harrods and Tiffany & Co. in New York.  Early Moorcroft is now much sought after.
https://www.moorcroft.com/

The relatively small bottle oven still standing at the Moorcroft factory in Cobridge is open to the public. It is in remarkably good condition and has obviously been well cared for. It is now a visitor attraction alongside the Moorcroft museum and shop.

This updraught, 'skeleton type', oven was built in 1919 as a biscuit oven - glost firing taking place in two similar ovens which were on site prior to their demolition in 1956. This oven was last fired in 1959. It stands 60ft high, with firing chamber diameter of approx 12ft and internal height to the shoulder of the crown approx 13ft.

The gap between the outer chimney and the inner firing chamber, found on all skeleton type ovens, is around 9" wide. The ironwork surrounding the tall wicket entrance is remarkably well constructed with 1" thick cast iron.

The oven has just six firemouths complete with their bags. Under the domed floor, flues connect the firemouths to the central well hole. Original bonts and firedoors remain in place. The regulator holes, spy holes and trial holes have no metal work attached to them.

The domed crown has a central crown damper and three quarter dampers, together with shoulder holes.

Inside the dimly and atmospheric firing chamber are examples of saggars and 'osses. Well worth a visit.


* what3words is an app which gives every 3x3 square metre of the globe a unique 3-word address. This simple and accurate way to describe an address has made it easy it easy to inform the location of Potteries bottle ovens and kilns. Many thanks go to Andy Perkin of the Potteries Heritage Society for researching and providing the what3words used here.
Home