Huge, towering and complex brick-built bottle ovens and kilns, integral to a potbank and an essential tool in pottery manufacture, were once the dominant feature of the Potteries landscape.
What is a Bottle Oven?
Bottle ovens and kilns facts. At their peak, in the 1930s, around 2,000 existed in the city of Stoke-on-Trent. Most of the potters' bottle ovens were fired once a week, some twice. At each firing at least 10 tons of coal was burnt in each oven. Some very large ovens, with up to 14 firemouths, used over 30 tons per firing. Each firing could last over 72 hours, sometimes longer in difficult conditions.
Bottle Ovens 1954
46 seconds from the film called 'The Peak District'
Thick, black, choking smoke always filled the air.
Sooty smuts clung to everything. 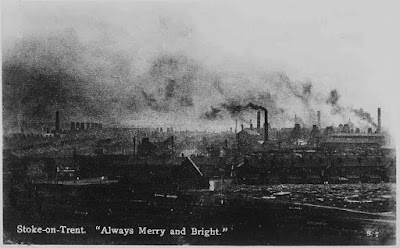 But a change, initiated in the first quarter of the 20th century was building momentum as manufacturers searched for more efficient and cleaner ways to fire their products.  Town gas, oil and electricity were taken on to fuel innovative intermittent and continuous firing tunnel kilns. The use of coal fired bottle ovens and kilns began to decline.
The Clean Air Act of 1956  finally put a stop to their use and sealed the fate of the traditional coal-fired oven. Pottery manufacturers were forced to change but allowed seven years to fully adapt to the alternative methods and fuels.

By 1960 there were less than 200 operable coal-fired bottle ovens.
By July 1963 all bottle ovens and kilns were redundant, although just a few were used after the deadline. The skills of the people who used them were redundant too. Their skills faded away. The rush to demolish, encouraged by the local council, began in earnest.

In 2021 fewer than  50  (now precious examples) remain standing complete with their bottle-shaped chimney. Of these only  30   are potters' ovens, used for biscuit or glost firing. 18  of these are within a very short walk of Gladstone Pottery Museum in Longton, the southernmost of Stoke-on-Trent's six towns.

Interestingly, throughout the whole of the UK, less than 100 pottery oven and kiln structures remain. More details here>

"…incredibly interesting, informative and very well illustrated.
I can recommend it to anyone who is interested in the history behind the pottery industry."
Brian Milner

"It's a delightful read and such an unusual and creative way
of telling the story - the reader is drawn into it!"
Professor Jennifer Tann,
Director of 'Potbank' the official film of The Last Bottle Oven Firing

Potteries Bottle Oven Day - Every August 29th
the date in 1978 when a Potteries bottle oven
was kindled and fired for the last time.

"The ovens are the most important part of the potter's plant, and it is on their successful management that the results of the business will largely depend."  Ernest Albert Sandeman, 1901
"The pottery kilns and ovens ... without these great bottles of heat, there would be no Potteries. They represent the very heart and soul of the district."  J. B. Priestly, English Journey 1934
"The actual operations of the fireman and his assistants are obviously vital factors in successful oven practice."  Stanley R. Hind, 1937

"...when admiring a piece of fine pottery, spare a grateful thought for the fireman.” Robert Copeland, 2009

"From these huge, filthy, curious brick-built and iron-strapped structures came the most exquisite, delicate and utterly beautiful pottery in the world." Anon, 2018

Before 1963, the red hot heart of the Potteries

The Potteries Bottle Oven : the huge, imposing, and towering brick-built, bottle-shaped structure, up to 70 feet high, essential on a potbank for the making of pottery.

"In the pottery district of North Staffordshire,
chimneys may at any time be seen vomiting forth black smoke
filling the streets and roads to such on extent as sometimes to impede vision
beyond a distance of a few yards."
Extract from The Report for 1878 of the Medical Officer
of the Local Government Board.
"It's a fine day
if you can see the other side of the road"
Images of the remaining examples here>
Where are they located? here>


"Figure to yourself a tract of country, the surface of which, cut, scarred, burnt and ploughed up in every direction, displays a heterogeneous mass of hovels and palaces, farmhouses and factories, chapels and churches, canals and coal pits, corn fields and brick-fields, gardens and furnaces, jumbled together in 'the most admirable disorder' and you will have a pretty correct idea of the Staffordshire Potteries. Pervade the space your fancy has thus pictured, with suffocating smoke, vomited forth incessantly from innumerable fires, and the thing will be complete."  Monthly Magazine, 1st November 1823.

"In the pottery district of North Staffordshire, chimneys may, at any time, be seen vomiting forth black smoke filling the streets and roads to such an extent as sometimes to impede vision beyond a distance of a few yards." The report for 1878 by the Medical Officer of the Local Government Board

"It seemed as though all the porcelain and earthenware for the supply of the world might be made here. Acre after acre and mile after mile of kilns and furnaces, crowded together in some instances, or a little more scattered in others, covered this region." Wilbur Fisk, Travels on the Continent of Europe, with engravings (Harper & Brothers: New York, 1838), p. 503.


In 1939 there were about 2000 bottle ovens and kilns, or strictly speaking, bottle-shaped structures of various types used for firing pottery ware or its components. They dominated the landscape of the Potteries of Stoke-on-Trent. Most were fired once a week. At a push, some were fired twice a week. Each firing required at least 10 tons of coal. Each 'baiting' filled the atmosphere with thick, belching black smoke.

In 2019 there are fewer than 50 bottle-shaped structures still standing. The bottle oven at Hudson and Middleton's factory in Normacot Road, Longton, was the last one to be fired, in August 1978. None will ever be fired again. The Clean Air Act of 1956, and their delicate condition have put paid to that.

In total 30 potters' ovens remain standing. These were the ones specifically used for the firing of biscuit or glost pottery. 18 of those are within a 5 minutes walk of Gladstone Pottery Museum in Longton, Stoke-on-Trent

At the multi-award-winning Gladstone Pottery Museum itself, there are 5 bottle ovens. There are also two next door, at the Roslyn Works. This is the most important and most precious group of buildings in The Potteries.

Throughout this website the term 'bottle oven' refers to a bottle-shaped structure, of various types and functions, used for firing pottery ware or its components. Bottle ovens can be classified into four main types. Within these four types are additional variations giving a total of twelve different types of oven. All are listed here>

This was the penultimate commercial bottle oven firing in The Potteries.  It was at the factory of Acme Marls, Bournes Bank, Burslem and it took place in the summer of 1976. This small selection of photos was taken at the event. more here>

One further firing took place at the factory before production was transferred to a new site.