The icon of Stoke-on-Trent


Huge brick-built bottle ovens and kilns, integral to a pottery factory and essential in pottery manufacture, were once the dominant feature of the Potteries landscape.

At their peak, around 2,000 existed in the City of Stoke-on-Trent. Most of the potters' bottle ovens were fired once a week, some twice. At each firing at least 10 tons of coal was burnt in each oven. Some very large ovens, with up to 14 firemouths, used over 30 tons per firing which could last over 72 hours. 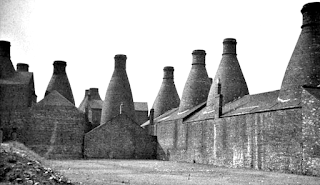 Thick, black, choking smoke filled the air. However the Clean Air Act of 1956 put a stop to their use and sealed the fate of the traditional coal-fired oven. Pottery manufacturers were allowed seven years to find alternative fuels.

By 1960 there were less than 200 operable coal-fired bottle ovens. New kilns, fired with gas or electricity, had replaced them. By 1963 all bottle ovens and kilns were redundant and the skills of the people who used them were gradually being lost.

In 2020 fewer than  50  remain standing complete with their bottle-shaped chimney. Of these only  29  are potters' ovens, used for biscuit or glost firings. Eighteen of these examples are within a short walk of Gladstone Pottery Museum in Longton, the southernmost of Stoke-on-Trent's six towns.