On 29th August 1978 a traditional Potteries bottle oven was kindled and fired for the very last time. The event was organised by the 19 staff and 72 volunteers of Gladstone Pottery Museum in Stoke-on-Trent, and hit the national headlines in print and broadcast media. It was a proud day for the Potteries and was described as 'its biggest cultural event of the 20th century'.

Huge brick-built bottle ovens and kilns, integral to a pottery factory and essential in pottery manufacture, were once the dominant feature of the Potteries landscape. At their peak, around 2,000 existed in the City of Stoke-on-Trent. Most potters' bottle ovens were fired once a week, some twice. At each firing at least 10 tons of coal was burnt in each oven, with some very large examples consuming over 30 tons per firing. Oven firings could last over 72 hours and filled the air with thick, black, choking smoke. 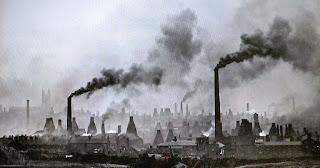 Ultimately, the Clean Air Act of 1956 put a stop to their use and sealed the fate of the traditional coal-fired oven.

By 1960 there were less than 200 operable coal-fired bottle ovens in north Staffordshire. New kilns, fired with gas or electricity, had replaced them. By 1963 all bottle ovens were redundant and the skills of the people who used them were gradually being lost.

Now only 47, complete with their bottle-shaped chimney, remain standing. The bottle oven chosen for the final firing formed part of the Hudson & Middleton works in Normacot Road, Longton. The bottle oven still exists today.
For the Last Bottle Oven Firing it was filled with 1174 saggars containing specially made commemorative pottery. The eight firemouths around the oven were then filled with rolled newspaper, dry wooden sticks and 4 cwt (200kgs) of coal. At precisely 12:37 the first firemouth was kindled and over the next 31 hours about 12 tons of coal were burnt to raise the temperature in the oven to around 1050°C to fire the pottery inside.

The firing was an outstanding success. The resulting pottery was fired to perfection. The glazed surface was lustrous and bright. The pottery and saggars used in the firing were sold to raise much needed funds to help preserve the bottle ovens at Gladstone Pottery Museum which, today, is a multi-award-winning tourist attraction in the region.


Potteries Bottle Oven Day - the day the last oven was kindled - so special for the people of the Potteries.