In 1775, Yates' map records the townships of  'Handley Green and Shelton.' The pottery industry took off with the construction of the Trent and Mersey Canal in 1777, the associated development of Wedgwood's potteries at nearby Etruria, and then the opening of the Caldon Canal. In 1783, local businessmen formed a corporate charter for Hanley with Shelton it became a market town under an Act of 1813, and by 1830 it was considered one of the largest towns in the area.

From Phil Rowley "Here's a photo of the largest [bottle ovens] I know about : they were at the Ridgway factory here on the Caldon canal at Shelton - there were two sets of four standing in a straight line. You can get a rough idea of their height by noticing the size of the doorway into the nearest oven.

To confirm this, some years ago I printed out the photo and then used a travelling microscope to count the number of courses. I then used the average course spacing from the bottle-ovens at Gladstone museum to calculate that they were approximately 80 feet tall. It might have been a case of 'our bottle-ovens are taller than yours' with the other local factories.

The inner firing chamber would be no taller than 20 feet and there's a local story that they were used as air-raid shelters during WWII, when the factory was not producing." April 2020

J. K. Weatherby & Sons Ltd., Town Road. The firm was founded in 1891 and the existing factory was built in 1906. Four ovens are known to have existed on the works but only two remain:
1) Updraught hovel oven - its hovel collapsed, February 2012
2) Decorator's muffle kiln - its chimney collapsed earlier than the hovel oven, blown down in a gale , unknown date.

The large, squat, glost bottle oven was last fired in 1965 and subsequently used for the storage of empty biscuit saggars and wood wool. The firing chamber  stood off-centre within the hovel and was probably rebuilt sometime in its history. This is a large firing chamber with 10 firemouths. At one time it was equipped with modern thermocouples to measure the temperature inside the firing chamber when being it was fired.

The small muffle kiln oven was used as a "hardening-on kiln" and probably an enamel kiln. The muffle chamber is approached from the yard via a small workshop which would presumably have served as a placing room. Two 'stable' type cast iron doors backed with firebrick blocks were in position at the entrance to the chamber in 1975. Both are badly rusted and immovable.

BOTTLE OVENS and KILNS STILL STANDING,  WITH THEIR CHIMNEYS

Two flint calcining kilns at the site of Johnson Bros., Trent Pottery sanitaryware factory, Hanley. Between Botteslow Street and Eastwood Road. Now surrounded by a housing estate. In 1975 there were 3kilns. The factory closed in 2003.

Before flint can be added to the pottery body recipe it had to be crushed to a very fine powder. In their raw state flint pebbles are impossible to crush as they are too hard. When they are calcined, or burnt, they become brittle and can be crushed and ground with ease. Flint pebbles and coal slack were loaded in alternate layers into the bowl of the oven, below ground level. One ton of slack was used for 20 tons of flint. The materials were lit at the bottom of the kiln and allowed to burn naturally. After about 2 days a sufficiently high temperature of about 900°C to 1,000°C would have been reached to transform the flint, and the coal would have burned away. When cool enough to handle the brittle flints were drawn from the opening at the base of the bowl and sent to be crushed and ground.

Updraught potter's bottle oven. Hovel only, no firing chamber. Former Smithfield Pottery, Warner Street, Hanley. Clearly visible from the Potteries Way ringroad. Late 19th Century brick, slate roofs, single ridge and two gable ends.  When surveyed in 1975 it had a small enamel kiln inside the hovel. It has been used as part of a brush making company. Later was converted to a restaurant and jazz club. In 2019 used as offices.

The Dudson Company was established by Richard Dudson in 1800, but went out of business in Summer 2019. One bottle oven remains standing but only the hovel only remains - the firing chamber has gone. The hovel is free standing in the central yard of what was the factory premises. It is the sole remaining oven of three which are believed to have existed. The hovel bears a plaque which would indicate that it was originally constructed in l872 at which time Dudsons were mainly involved in the production of ornamental ware, including figures. The hovel itself is 60' high and has an overall diameter of 33'3". The oven is assumed to have been an updraught with hovel and firing chamber - similar to the layout at Gladstone Pottery in Longton. The bottle oven has not been fired since the Second World War. The hovel now houses a magnificent museum of Dudson.

Opened in 1857, Jesse Shirley's bone flint mill is the only remaining operational steam driven potters' mill in the world. It operated until 1972 producing ground bone, flint and Cornish Stone used by the pottery industry. It also produced bone meal used by the agricultural industry to improve soil. Fully restored between 1978 and 1990 the mill is driven by an 1820s Bolton and Watt rotative beam engine.

It is one of the oldest still working and may be the oldest still driving machinery for which it was installed. Steam is raised by a hand-stoked Cornish boiler built at nearby Cliffe Vale in 1903. The site’s historical significance was recognised in 1975 when it was designated a Scheduled Ancient Monument with the buildings being Grade 2* listed. The site was officially opened to the public by Fred Dibnah on 6th April, 1991. It continues to be maintained and operated by volunteers.

One chimney with two firing chambers 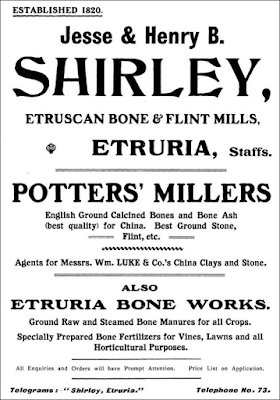 * what3words is an app which gives every 3x3 square metre of the globe a unique 3-word address. This simple and accurate way to describe an address has made it easy it easy to inform the location of Potteries bottle ovens and kilns. Many thanks go to Andy Perkin of the Potteries Heritage Society for researching and providing the what3words used here.