When we visited this factory in July and August 1976, it supported three oil-fired Wilkinson downdraught, integral chimney type ovens. They were numbered 6, 7 and 8.  At the time, Number 8 was empty, Number 7 had been placed (set-in, or filled) and Number 6 was being fired. More about downdraught ovens here>

The products being fired were refractory 'bats' or kiln furniture, used in the ceramics industry. 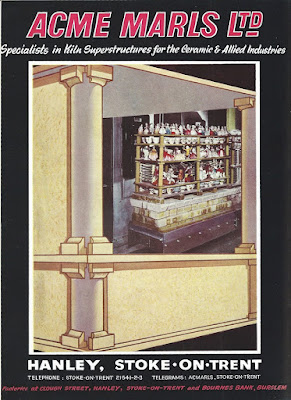 We were privileged to have been there and able to take just a few photos of the firing of  Oven No.6.

Oven No.7 was fired in October 1977 and was the last oven to be fired at the factory before manufacture was transferred to its new site in the town. A ceremonial flaming torch was taken from the fire in oven No.7 to the new gas kiln at the new site. See extract from local newspaper article below.

Here is a selection of the photos we took in 1976 in the cramped and awkward and very hot conditions with no space to get good overall shots.


The last oven to be fired at Acme Marls, Bournes Bank, Burslem. October 1977