A Topographical History of Staffordshire by William Pitt, 1817
"This occasioned such immense and constant volumes of smoke, as literally to envelope the whole neighbourhood; and it was not infrequent for passengers to mistake their way, and run against each other, during the continuance of this process. The scene which presented itself upon these occasions, has been not inaptly compared to the emissions from Etna and Vesuvius..." 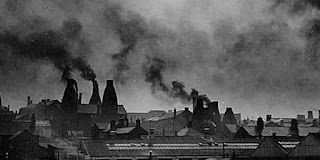 Monthly Magazine, 1st November 1823
"Figure to yourself a tract of country, the surface of which, cut, scarred, burnt and ploughed up in every direction, displays a heterogeneous mass of hovels and palaces, farmhouses and factories, chapels and churches, canals and coal pits, corn fields and brick-fields, gardens and furnaces, jumbled together in 'the most admirable disorder' and you will have a pretty correct idea of the Staffordshire Potteries. Pervade the space your fancy has thus pictured, with suffocating smoke,  vomited forth incessantly from innumerable fires, and the thing will be complete."


English Journey by J.B.Priestley, 1934
"There were no tall chimneys, no factory buildings frowning above the streets; but only a fantastic collection of narrow-necked jars or bottles peeping above the house tops on every side, looking as if giant biblical characters after a search for oil or wine, had popped them there, among the dwarf streets. These, of course, are the pottery kilns and ovens ... Without these great bottle of heat, there would be no Potteries. They represent a very heart and soul of the district, as you very soon learn; and unless you are prepared to take a deep and lasting interest in what happens inside those ovens, it would be better for you to take the first train anywhere."

Huge brick-built bottle ovens, integral to a pottery factory and essential in pottery manufacture, were once the dominant feature of the Potteries landscape. At their peak, around 2,000 existed in the City of Stoke-on-Trent. Most of them were fired once a week, some twice. At each firing at least 10 tons of coal was burnt in each oven. Some very large ovens used over 30 tons per firing. Thick, black, choking smoke filled the air. However the Clean Air Act of 1956 put a stop to their use and sealed the fate of the traditional coal-fired oven. Pottery manufacturers were allowed seven years to find alternative fuels.

THE ORIGIN OF SMOKE IN BAITING

Extract from:  Excess Air in the Firing of Ovens and Kilns by J W Mellor, Based on a paper: Transactions of the English Ceramic Society, 6, 58, 1907

But practically, owing to the fact that air and gas currents can pass along in streams side by side from firemouth to hovel without mixing to any great extent, very much more than the theoretical amount of air is required before we have an adequate supply for complete combustion.”

“I did not expect to find the greatest excess of air passing through the ovens and kilns immediately after a baiting when the fire-mouths were smoking, and least when the fire was burning clearly without smoke.

A probable explanation is that the burning hydrocarbon gases which are given off when coal is first put on the fire are decomposed by the inrush of cold air with the formation of smoke or soot, when the fireman opens everything immediately after a baiting in order to "clear the oven," and simultaneously the temperature is reduced below the "burning temperature" of the smoke.

The admission of cold air into a hot furnace burning hydrocarbon gases makes smoke instead of clearing it. But there are other reasons why air is allowed to rush through the oven immediately after a baiting.

The mechanism of the reactions which occur when the hot hydrocarbon gases, methane, ethylene and acetylene are brought in contact with cold air is, no doubt, a mechanism which is very complex. In any case the liberated carbon ultimately aggregates into particles of soot and smoke.

When smoke is once formed it can only be burned with very great difficulty.” 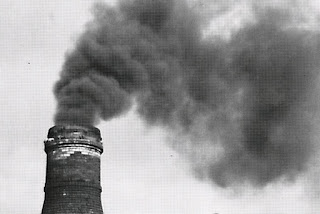 SUMMARY of the full article:

SMOKE CONSUMPTION IN THE POTTERIES

Extract from: The Civil Engineer and Architects Journal. Mention of The Sanitary Act 1866
Here is an interesting piece about the smoky conditions of the Potteries. Digitised on Google Books  click here>