Early development and evolution of the oven
Edited extract from:  'The Polished Earth' by Archibald M. Maddock, II.  1962


"There was a major advancement in the art of baking pottery when it was found a more resonant and better texture of ware could be achieved with higher temperatures.

The first efforts to use fire to bake clay, exposed the piece to the flame by placing it near a fire built upon the ground. The results from such a method could not be other than unsatisfactory. The American Indian is credited with baking large pieces of pottery by building a fire entirely surrounding the piece; this as we can well understand would be an improvement.

An early effort of the Near East potter to improve his product by better baking methods was to build a perforated platform over a pit and upon this place the ware to be fired; in this case the fire would be built upon a hearth in front of the platform at a lower level. The fire would be drawn into the pit under the platform by the draft created from the heated air passing through the holes in the platform.

The next development seems to be the addition of a chimney at the end of the platform, opposite the hearth; this plan overcame the objectionable feature of having the ware come in contact with the flame and gases of combustion.

The next step was to enclose the platform upon which the ware was placed; this would tend to be more efficient and an improved baking method. We now have reached the point where we could properly call this device a kiln or oven.

The next move was to do away with the chimney at the end of the platform and move it directly above the enclosure or kiln. Again, however, we have the fire and combustion gases coming into contact with the ware. To overcome that objection, the potter placed his ware in containers which were made of coarse clay and grog that would withstand the flame and combustion gases.

There have been two general varieties of kilns in use, one known as the muffle type which was designed to have the fire surround the compartment in which the ware was placed. This kind of construction, usually rectangular in shape, would keep the flame and fumes from coming in contact with the ware. The other pattern, called direct fire or open-fire kiln, was round and similar in shape to a bottle or beehive, the type in which the flame and combustion gases entirely fill the kiln. In this case the ware was protected from the fire by placing it in containers. These containers were known as saggars and were made of coarse clay and grog which were capable of enduring the severity of the flames."

1813
Developments and Innovations in Europe
M. Nieseman's Improvement of an Oven for Baking Pottery 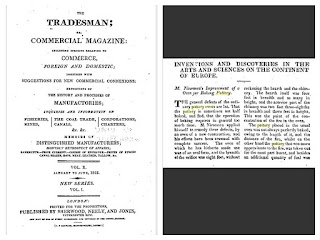 1853
Development of the Tunnel Kiln to improve the efficiency of firing.
Edited extract from:  'The Polished Earth' by Archibald M. Maddock, II.  1962

"It was the development of the tunnel or continuous kiln which really brought a worth-while innovation to this phase of production. As is so often true, the real beginning of an improvement pre-dates the general adoption of the idea by many years and many changes must be made in the original plan. This was certainly true of the tunnel kiln. Credit for making this theoretical improvement practical goes to Conrad Dressier, who could see its future possibilities. Continuous tunnel kilns had been constructed for over one hundred fifty years but it was Dressier, an English sculptor of very high standing in that profession, who laid aside his art and undertook the problem of having tunnel kilns operate successfully. It was Dressier who worked out the design of a muffle-type tunnel kiln which overcame the necessity of using saggars. The best proof that the conception of an idea in most cases pre-dates its practical usefulness, if ever, by a long period of trial and error, is the following copy of a letter written by Thomas Maddock to his cousin in England.

New York, December 5th, 1853.
To Mr. Wm. Maddock
Dear Cousin
If I had not a good excuse for not writing sooner, I should feel ashamed but I think, I have and will give it. I have deferred writing you in consequence of a new experiment we have under hand in a Furnace and I was anxious to have made a full trial before writing, but as my brother, Wm. Steel is leaving for the Potteries I am compelled to write, so I will tell you the plan as far as we have gone -

The furnace we are building is what we call a Graduated Sectional Furnace which can be kept at a different heat in each section. The goods to be placed on a wagon in cases or saggars and be moved out of one section into another, thus the first Chamber will be just coming to a low red heat and the next one at a full red heat (with doors separating each section) then the next one at a lower temperature, so we shall have three graduations of heat, and we shall have more if required.

The great advantage will be we can commence at the beginning of a year to fire and continue through the year without letting out our furnace, so you see we save the expense of heating the furnace each time. The wagon on which the goods are placed and the rails will be of iron. We have made provisions for protecting them from the fire. We also calculate to fire with Anthracite Coal which is very enduring in the fire - one heating will last three or four hours and gives out a great heat but scarcely no flame.

We have built one small furnace for a trial and are satisfied the thing will answer. We have made application for a patent for the plan and are now commenced to build one on a large scale. We have not told even Wm. Steel of the plan, so you can give him the news if you like. I think by the time you write me, which I hope will be soon, I shall be able to send you a full and satisfactory account of the thing as I hope by that time to have it in full operation.
Thomas  "

1854
Construction of kilns for burning pottery and other ware.
Patent Number: 1161 published: 24 May 1854
JENNINGS, JOSIAH GEORGE and DAVENPORT, ROBERT

1869
"Subject-matter index of patents applied for and patents granted, by B. Woodcroft"
List of Patents for pottery ovens 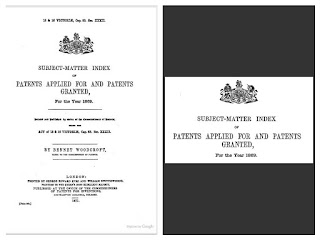 1873
ROBEY DOWNDRAUGHT OVEN
Type of bottle oven. Downdraught.
Patented by Clement Robey.
British Patent 970
17 March 1873
An example of a downdraught. The patent also included the method for converting an existing updraught oven to a downdraught. There was a great deal of interest amongst Staffordshire potters in the 1880s for improving the performance of pottery ovens. It was claimed that this new oven design would save from 35 to 50% in fuel, would create more uniform finished product, reduced saggar losses and a flat floor to the oven which helped placing. Sampson Bridgwood Ltd of Longton invested in Robey patent ovens in 1880 but by 1890 described the alterations as a 'failure'.

1875
MINTON PATENT
Improvement in Ovens for the Firing of Pottery
Patented by T W Minton.
US Publication number US165856 A
20 July 1875

Some text from the Patent :
"To all whom it may concern Be it known that I, THOMAS WILLIAM MINTON, of Stoke-upon-Trent, in the county of Stafford, England, manufacturer, a subject of the Queen of Great Britain, have invented or discovered new and useful Improvements in Ovens for Firing Pottery, Glass, and other substances; and l, the said THOMAS WILLIAM MINTON, do hereby declare the nature of the said invention, and in what manner the same is to be performed, to be particularly described and ascertained in and by the following statement thereof-that is to say This invention has for its object to improve the construction of ovens for firing pottery, glass, and other substances.

In the ovens previously in use the fuel is burned in feeders or mouths disposed partly on the outer circumference of the oven, and partly under the walls of the same, by which arrangement the greatest portion of the heat radiating from the coke, and a portion, also, of that given off by the gases, generated by the coals, has no other effect than to heat the surrounding brick-work without any direct action on the ware to be baked. In the improved oven the old feeders or mouths are dispensed with, the combustion of the coals being entirely efiected inside, or in the hold, of this oven, so that the heat from the coke or the gases has a more direct effect on the saggers containing the ware with which it comes in contact; thus a considerable reduction in the quantity of fuel required to fire the ordinary ovens is realized. Besides, by the addition of a second chamber on the top of the oven, use can be made of the heat that might escape from the lower part, for hardening the printed ware, or firing those articles of pottery for which a low heat is necessary, avoiding the necessity of surrounding the ovens by a second building called hovel, In this way an economy of space and money is effected. 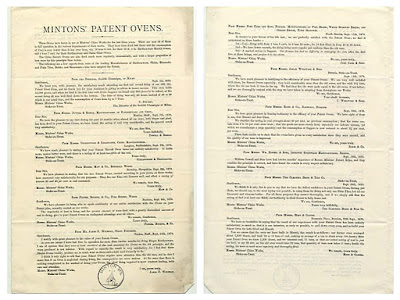 Documents now in the Minton Archive in Stoke-on-Trent here>

Proof of the effectiveness of the patented ovens here> http://www.themintonarchive.org.uk/minton-patent-ovens-part-3-proof/

28 Jun 1849 A long technical account of the Mintons patent oven, giving dimensions, etc. Much information about materials used in the English manufacture of porcelain; comparison of clays; techniques of firing; recipes for various "pates"; etc. Presumably many of these essays were intended for publication. http://www.themintonarchive.org.uk/collections/getrecord/GB1857_G272_1_5_8_1

Couleurs, Essais et Diagrammes A wide range of colour and body recipes listed and notes on firing trials and vitrification along with diagrams and sketches. http://www.themintonarchive.org.uk/couleurs-essais-et-diagrammes/


1890
WILKINSON DOWNDRAUGHT OVEN
Type of bottle oven. Downdraught.
The bottle oven was designed so that the hot gases from the firemouths rise up through the bag walls and central well hole (via flues) and then descend between the saggars to leave the oven through flue openings in the floor.
Patented by A J Wilkinson.
British Patent 4356
20 March 1890. 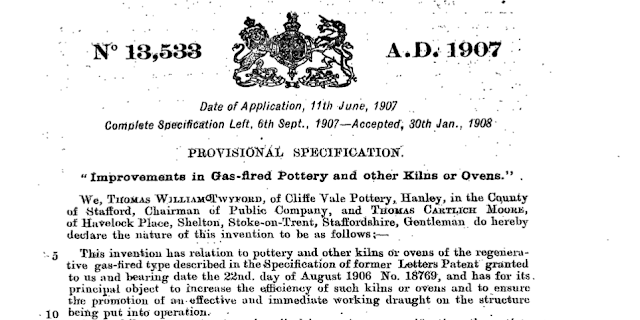 1918
Improvements relating to ovens or kilns for use in the manufacture of Tiles, Pottery and other Ware and for other purposes. Covering improvements in tunnel kilns
Patent by Minton Hollins
British Patent 113794
Accepted 4 March 1918 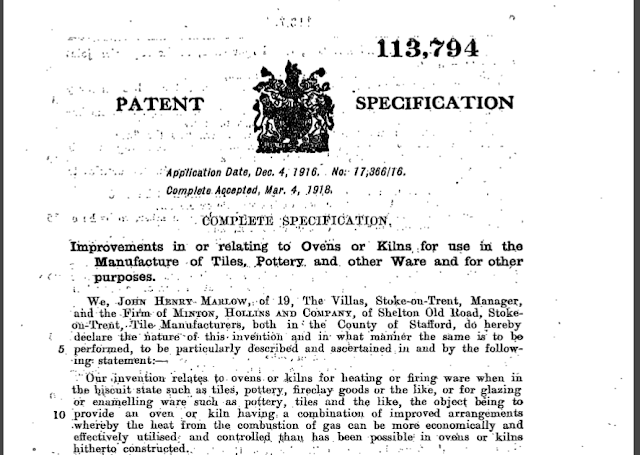 Sherwins Muffle Oven
Details unknown but research is on the way