Thunder Rock is a 1942 British drama film based on Robert Ardrey's 1939 play. It was directed by Roy Boulting, and starred Michael Redgrave and Barbara Mullen, with James Mason and Lilli Palmer in supporting roles. Here is an excerpt from it showing bottle ovens on a potbank. Can you guess where the potbank was? Answers on a postcard please!  (Many thanks go to Marie Graves for spotting this one!)

Excerpt from the film Thunder Rock 1942 from Terry Woolliscroft on Vimeo.

Published on 2 Sep 2015  From the Kinolibrary Archive Film collections.
To order the clip clean and high res or to find out more visit http://www.kinolibrary.com. Clip ref KLR887  Britain on Film. Directed by Terry Bishop. 26 mins. The five towns of the Staffordshire Potteries region are passionately promoted in Terry Bishop’s film, which structures itself around the arrival of an innocent young woman from London, the girlfriend of a factory worker’s son, who’s educated in the glorious heritage of the potteries. As well as lovingly detailing the area’s famed production techniques, the documentary also looks at the challenges of post-war reconstruction in the region.

The age old methods of hand making pottery are shown to survive into the post-war era, with a few technological innovations, in the "mother of the potteries”. This is a fine example of one of the many films made by the highly accomplished filmmaker Charles Chislett for the Church Pastoral Aid Society. This film gives a detailed picture of the process of making pottery in 1947 at the earthenware manufacturer of Wood and Sons in Burslem, the birthplace of Josiah Wedgwood, in the Potteries. Chislett has enhanced what may have been a rather dry offering by weaving it around a whimsical story involving his two children Rachel and John. 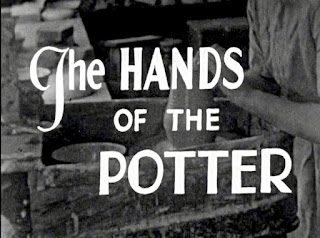 
Britain on Film. Directed by Terry Bishop. 26 mins. The five towns of the Staffordshire Potteries region are passionately promoted in Terry Bishop’s film, which structures itself around the arrival of an innocent young woman from London, the girlfriend of a factory worker’s son, who’s educated in the glorious heritage of the potteries. As well as lovingly detailing the area’s famed production techniques, the documentary also looks at the challenges of post-war reconstruction in the region. For the full film go here>  http://player.bfi.org.uk/film/watch-five-towns-1947/

Extracts from the film here:

Visited By Members Of The Anglo-American Productivity Council

Beulah_Library_Roll_F3-17. 6mm Kodachrome footage shot in the 1950s of the Trent and Mersey canal in the Potteries. Excellent shots of canal children playing in an industrial landscape.  This footage may be purchased from BEULAH at www.eavb.co.uk   Beulah  Director: Peter Sims  Cinematographer: James Ritchie Camera Assistant: David Watkin

Opening sequence to a 1950s film set in the Potteries and based on one of the novels by Arnold Bennett.

Additional information from Kevin Salt. "From the 1952 Dirk Bogarde film 'Hunted'. If you've not seen the film, the parts filmed in Stoke-on-Trent begin at 36:10. In the [movietone] video the street scene with lorry beginning at 0:36 is looking down Sutherland Road, Longton. The scene that follows (with the paper boy delivering a newspaper) is Oxford Street, Penkhull. (https://www.youtube.com/watch?v=jH1Lh8E-pd4)

Sequences show images of the Potteries. General views of the landscape scattered with Bottle Ovens, views of Honeywall in Penkhull, views of Oxford Street in Penkhull and views of Sutherland Road in Longton. Note: these sequences were available at one time on YouTube. They have since been removed.

1952 Opening sequence to the film of  Arnold Bennett's "The Card" 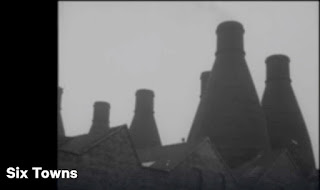 Introduced by a windswept Eric Ball: "50 years ago this was smothered in smoke" (actually in March 1960 it still looks pretty smoky) this commemorative film produced by ATV celebrates the six towns that make up Stoke on Trent. Each jostled for prominence in 1910, Burslem going as far as building a new town hall, but lost out to Stoke in the civic race. Hanley has the shops and a new civic centre on the way and Longton the potteries but each retains its historic importance.  Here>
https://player.bfi.org.uk/free/film/watch-six-towns-1960-online

Filmed in 1961.  Phoenix Works, Longton, Stoke-on-Trent, was completed by Thomas Forester in 1881 for his expanding Majolica manufacturing business. It had 6 bottle ovens. 4 subsequently demolished. Towards the end of the film you can see the 4 holes in the roofs which were patched.

When the swinging 60s hit Stoke its teenagers began to dance the twist and, on the surface at least, the city was thriving in the modern era. But this documentary for ATV's Look Around series shows how the six towns that came together fifty years earlier to form Stoke on Trent, are still proud of their separate identities. With this historical backdrop Stoke is trying to modernise and move forward with Hanley as its new civic centre. Images of bottle ovens in this 25 minute film here> 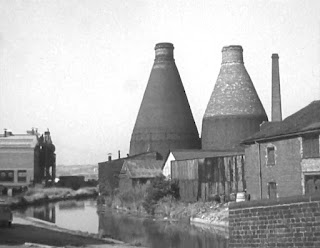 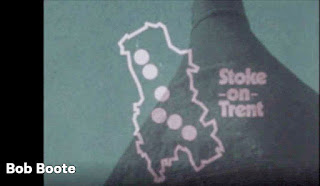 The potteries of Stoke persist, but this is a vision of post-industrial Britain. With pits and factories closed, polluted sites spoilt Staffordshire until restorative action was taken. Landscaping forms a new contract between man and nature, railway lines become green corridors, a quarry becomes Brockton nature reserve, closed roads allow Cannock Chase to rewild, and the River Churnet runs clean.

This film was part of the Pacemakers series produced by the Central Office of Information for the Foreign and Commonwealth Office to promote progressive Britons to the world. The film was edited for a wider audience and re-released in 1970 as Black Spot to Beauty Spot. Stoke native Bob Boote combined a career as a planner with activism as a pioneer conservationist. Here>  https://player.bfi.org.uk/free/film/watch-bob-boote-1969-online

Scenes from work in a bottle oven and smoking oven chimneys


1978 The Last Bottle Oven Firing in the Potteries

Kathy Niblett describes the massive changes in firing methods in the pottery industry of Stoke-on-Trent in the 1940s and 50s.


2012 The Canals and the Potteries

Potteries historian and film maker, Ray Johnson MBE,  joins us to chat to our Skipper Nicola about the impact of the waterways in the Potteries in Stoke-on-Trent, once of the industrial heartland of England. https://vimeo.com/46352420

The Canals & the Potteries from Pleasance Ahoy on Vimeo.

Hudson and Middleton's Factory, Longton, Stoke on Trent  was the site of The Last Bottle Oven Firing in 1978. This is a marketing film from 2014. See the history and processes of Hudsons of England, manufacturers of 100% British handmade fine bone china mugs since 1875.
Published on 11 Nov 2014