Exactly how many bottle ovens were there in the Potteries?  How many are there now?

Fewer than 50 bottle-shaped structures remain standing today in the Staffordshire Potteries. All are inoperable.

At one time, at their peak, it is thought that there were about 2000 bottle ovens/kilns in the Potteries (not the 4000 which have been suggested elsewhere). See below for more details.

Most were fired once a week. At a push, some were fired twice a week. The firing of a relatively small oven required around 10 tons of coal. Bigger ovens required much more. Each baiting filled the atmosphere with thick belching black smoke.

Today, (updated March 2019) only 30 potters' ovens, those used for the firing of biscuit or glost pottery, remain standing in the Potteries. The rest of the bottle shaped structures are either enamel or decorating kilns or calcining kilns. No beehive brick or tile kilns are left.

18 of those 30 potters' ovens are all within a 5 minutes walk of Gladstone Pottery Museum in Longton. So, two thirds of all the biscuit and glost ovens which now exist are concentrated in a very small area of the southernmost town of the six towns of the City of Stoke-on-Trent.

What's the difference between a bottle oven and a bottle kiln?

The terms are often used interchangeably (and confusingly) to mean the same thing - a brick built, bottle shaped structure for the firing of pottery or associated materials.

In the pottery industry of the 1950s, an oven usually meant the potter's coal-fired biscuit or glost oven with open, unprotected flames which passed directly into the firing chamber itself, enveloping the pottery inside.

The word kiln was usually used when the flames were 'muffled'  by being passed through a system of flues and thus kept entirely separate from the firing chamber. Muffle kilns included decorating  enamel kilns and hardening-on kilns.

Kilns also included calcining kilns (used for roasting flint pebbles or ox bones, to make them friable and for use in some pottery recipes), frit kilns (for making glazes), beehive brick and tile kilns and lime kilns.

Usage of the words varied from factory to factory, so its complicated and difficult to be precise. (Source: Alfred Clough, Master Potter, Industrialist, Fireman of the Last Bottle Oven Firing 1978)

How many? Differing statistics have been suggested

Some say that there were at one time 3000 or even 4,000 bottle ovens but this is an exaggerated figure. There were simply not that many.  But there were lots of other factory chimneys - those which serviced boiler houses, steam engines, slip kilns, and more. There were also those chimneys associated with collieries, the Shelton Bar steel manufacturing plant, and Michelin tyre company. These conventional chimneys added to the grand total which spewed their black filth into the atmosphere of the Potteries.

It is safe to say that, in their heyday, just over 2,000 operable coal-fired bottle ovens dominated the landscape of the six towns of Stoke-on-Trent.

So how can we be so sure?

This report from the BPMF, British Pottery Manufacturers Federation, in 1964 shows the details: 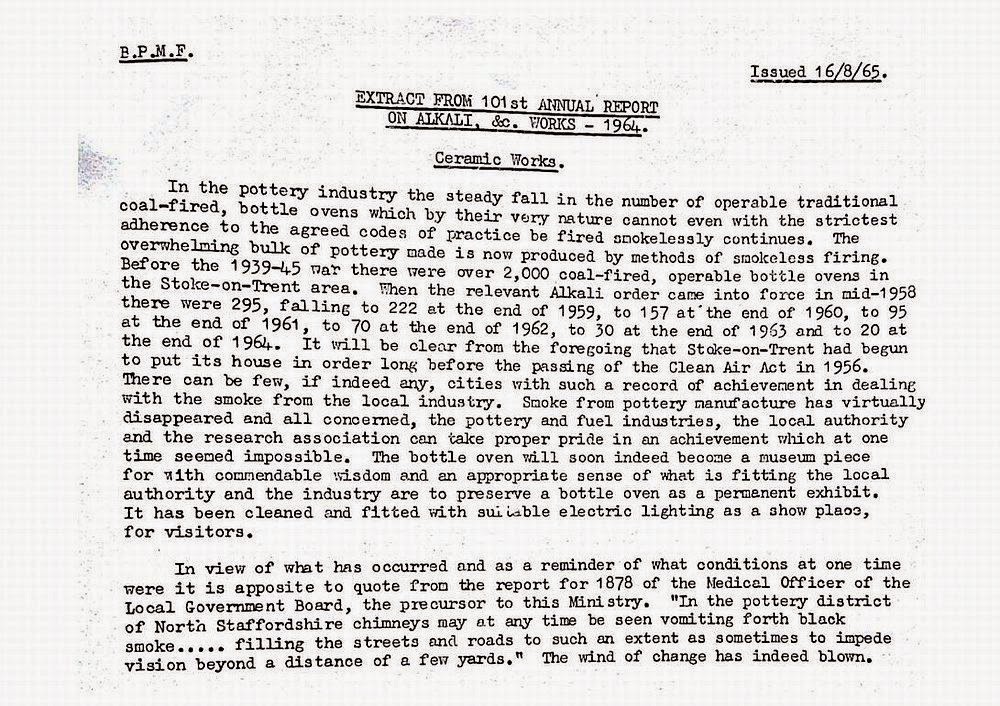 The Spode Factory in Stoke used 37 bottle ovens: 7 biscuit, 14 glost, 16 enamel.
Source: The Penny Magazine Of The Society For The Diffusion Of Useful Knowledge. May 1843

A photograph of the Josiah Wedgwood and Sons factory in Etruria, Stoke-on-Trent shows 21 bottle ovens

The Ordnance Survey  1:1250 Sheets clearly show the position of ovens on individual pottery factory sites. An analysis of these would clearly indicate how many bottle ovens/kilns existed at that time.

Extract from 'Industrial Health - a survey of the pottery industry in Stoke-on-Trent (Ministry of Labour and National Service) Report by H.M. Inspectorate 1959.  "During the period of the survey (1956-1958) there were 572 coal-ﬁred ovens or kilns still in use, but the industry estimates that at the present time it is burning at least half-a-million tons of raw coal a year less than it was before the war, and over 1,500 bottle-ovens have been replaced by smokeless ovens and kilns."

It is interesting to see that the inspectorate gives a figure of 572 coal fired ovens in use in 1956-1958 whereas the industry's own trade association (British Pottery Manufacturers Federation - BPMF) gave a much lower figure of 222. Perhaps the the Association wanted to show a more optimistic figure to demonstrate, perhaps, that they were proactive in ridding the district of the smoke-spewing bottle oven for good.

60 ovens were recorded by The North Staffs Junior Chamber in 'Operation Bottle'.  All but one (at the Hudson and Middleton Factory in Normacot, Longton) were inoperable.

The last time a bottle oven was fired in the Potteries.

47 bottle-shaped structures are still standing today, complete with their chimney. They can be found at 27 locations in the Potteries.

3 remains of bottle ovens can also be found. Two have hovel chimneys which have collapsed  and only their firing chambers remain - Falcon Pottery, Hanley.  One bottle oven has collapsed completely- Spode, Stoke.
All 50 are inoperable. Some have been restored. Some are open to the public. There are tall ones, short ones, wide ones and thin ones, square ones and circular ones.  No two are the same. All are Listed Buildings.

15% of all the remaining standing ovens/kilns are preserved in Uttoxeter Road, Longton at Gladstone Pottery Museum (more here>) and the adjacent Roslyn Works.

25% of the remaining ovens are owned by Stoke-on-Trent City Council. 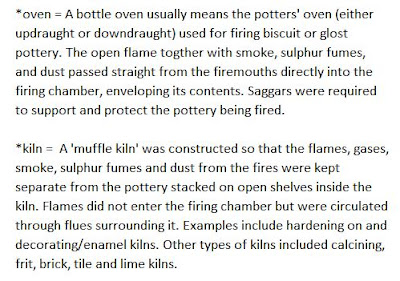 If the two bottle ovens at Roslyn Works, Longton, are included with the four ovens and one kiln at the Gladstone Pottery Museum, next door, then ovens/kilns can be found at 27 locations in The Potteries.

LOCATIONS OF THE REMAINING OVENS and KILNS

Bottle ovens are listed under the Planning (Listed Buildings and Conservation Areas) Act 1990, as amended, for its special architectural or historic interest. The 'List Entry Number' shown below against each location is the Historic England reference number on their site here>

TUNSTALL - 0
No bottle ovens remain in Tunstall, the most northerly of the six towns of Stoke-on-Trent.

2 x Calcining kilns
When viewed from above, you can see a divided flue in the single square chimney.  @ Milvale Street, Middleport, Burslem. List Entry Number 1220736 'kiln, square in section, with two flues separated only at the apex.'

3 x Calcining kilns
When viewed from above, you can see a divided flue in the single square chimney. @ Newport Lane, Middleport, Burslem. List entry Number 1297928 'a pair of calcining kilns adjoin the workshop range: one a narrow cylindrical form, the other square in section, with heavily moulded cap, and chimney to rear.'

1 x Muffle, remains of a collapsed oven. Firing chamber only.
@ J H Weatherby Falcon Pottery, Town Road, Hanley: The remains of one of a muffle kiln is housed on this site, immediately adjacent to the collapsed updraught oven.

1 x Potter's updraught oven (originally a biscuit oven but used as a glost oven when fired for the lst time)
@ Normacot Road, Longton. Hudson and Middleton, Sutherland Works.
This was the last bottle oven to be fired in the Potteries, in August 1978.
Oven firing organised by Gladstone Pottery Museum >


NOTE: Don't get confused!
There are two factories in the Potteries which have the same name - Falcon. In Stoke the Falcon Works were the works of W.H. Goss, off London Road/Sturgess Street. And in Hanley Falcon Pottery - the factory of  J.H. Weatherby, in Town Road.

Courtesy of  "The Way We Were" published by The Sentinel, 5 April 2008

"At the peak there were more than 2,000 bottle ovens in the district, all in use at different times in a week. The pollution was appalling. The thick smoke sometimes made it impossible to see the other side of the street in Burslem or Longton.

It inspired the improbable story that a German bomber pilot saw the pall of smoke over the Potteries and flew on, thinking the place had been bombed already. This piece of self-mockery typical of Potteries humour, might well have been dreamed up. All the same, you can see why the national image of Smoky Stoke lingered so long. It all came to an end in the late 1950s when the Smoke Abatement Act forced firms to turn from bottle ovens to tunnel kilns fired by gas or electricity. This put a lot of small companies out of business.

But there was no denying this was a further step along the way to eradicating those aspects of the industry most harmful to health, something which long before had been the concern of medical men like Dr John Arlidge. Dr Arlidge was a pioneering figure in tackling ill-health among pottery workers exposed to dangerous materials and the ever-present dust, which caused thousands of deaths.

Yet soon after the disappearance of the bottle ovens, the pottery industry began to change in other ways. So our pottery industry today is a mere shadow of what it used to be. Sons and daughters no longer follow their parents into the potbanks which are left."