Pollution, the Clean Air Act of 1956
and the rush to demolish bottle ovens

The firing of a bottle oven or muffle kiln was a profession in itself. It was an important and revered job. There was so much at stake. A successful fireman required years of experience since just a few minutes ignorance or carelessness could often mean ruin to the oven’s contents, and to the factory.

The final temperature to be attained must be as even as possible throughout the firing chamber. The long flames produced by bituminous coal carried heat to the middle of the setting. Temperature rise had to be carefully controlled, as a satisfactory finished article depended on the time it was subjected to the heat, at varying degrees of temperature.

In bigger ovens a ton of coal could be fed into the firemouths within the space of minutes. Baitings such as these created massive volumes of thick, black, choking smoke which enveloped the surrounding streets. Both the factory workers and their innocent neighbours were subjected to unacceptably high levels of pollution and their health inevitably suffered.

In the early 1950s the UK government concluded that they needed to introduce laws to curtail the production of dark smoke and on 5th July 1956 passed the Clean Air Act - "An Act to make provision for abating the pollution of the air" The essence of the Act was that '… dark smoke shall not be emitted from a chimney of any building, and if, on any day, dark smoke is so emitted, the occupier of the building shall be guilty of an offence."

Pottery manufacturers were given seven years to make provisions to fully comply with the Act. Use of the familiar bottle-shaped oven, fired with coal, declined and by 1963 their fate was finally sealed. Of the 2000 or so bottle ovens which once littered the skyline of the Potteries only 47 remain standing complete today (2019).

“In the pottery district of North Staffordshire, chimneys may at any time be seen vomiting forth black smoke filling the streets and roads to such on extent as sometimes to impede vision beyond a distance of a few yards." Extract from The Report for 1878 of the Medical Officer of the Local Government Board.

Research by Pam Woolliscroft. Relevant information from research specific to the Spode Company of  Stoke-on-Trent, pointing to improving the air quality in the 1930s through to the 1960s.

Arthur Hewitt's impact on the greater success of Spode was huge with increased orders and modernisation. He was involved with local politics, including being Lord Mayor, and was an advocate of clean air introducing firing by gas and electricity to Spode to replace smoky bottle ovens.

In 1936 a gas-fired tunnel oven for glost firing of earthenware was installed.

In 1946 an electrically-fired glost tunnel kiln, named The Meadow, was installed for firing bone china

In 1957 a Shelley 'Top Hat' kiln was installed for china glost firing.

1960 also saw the last firing of a coal fired bottle oven on the Spode factory.

Much demolition of bottle ovens and old buildings took place on the Spode site in the 1930s and 1950s, as the company moved towards modernisation. The names of the kilns were often taken from historic names of parts of the factory.

The Clean Air Act of 1956 and the electrification of the factory in the 20th century led to big changes. The increased use of gas and electric for firing, led to the demolition of all but one bottle oven, the hovel of which collapsed in 1972.

An Act to make provision for abating the pollution of the air. 5th July, 1956.

"Prohibition of dark smoke from chimneys: Subject to the provisions of this Act, dark smoke shall not be emitted from a chimney of any building, and if, on any day, dark smoke is so emitted, the occupier of the building shall be guilty of an offence."

Manufacturers had seven years to make provisions to fully comply with the act, so 1963 was the deadline.  more here>

Some firms, particularly suppliers of calcined flint to pottery manufacturers, continued to used their bottle kilns for the calcining the flint pebbles. They used 'smokeless coke', sourced locally, to substitute coal. The Bottle Oven Survey of 1975/6 found that Furlong Mills, in Burslem and China and Earthenware Millers, of  Longton used this well into the 1970s. One company, Acme Marls of Burslem used heavy as the substitute fuel.

Extract from 'Industrial Health - a survey of the pottery industry in Stoke-on-Trent (Ministry of Labour and National Service) Report by H.M. Inspectorate 1959

"Many people who have not visited the Potteries link the area with the Black Country; this, however, is separated from the Potteries by many miles of open country and the extensive Cannock Chase. They think of the Potteries as an area of bottle-ovens and factory chimneys belching out black smoke day and night and the whole area constantly bathed in gloom and fog.

Today the atmospheric pollution as judged by ordinary observation is probably no worse and no better than that of any other industrial area of a similar size. The amount of smoke arising from pottery ﬁring has been progressively reduced by the continuing replacement of the coal-ﬁring bottle-oven by electric or gas-ﬁred intermittent and tunnel ovens.

During the period of the survey (1956-58) there were 572 coal-ﬁred ovens or kilns still in use, but the industry estimates that at the present time it is burning at least half-a-million tons of raw coal a year less than it was before the war, and over 1,500 bottle-ovens have been replaced by smokeless ovens and kilns." 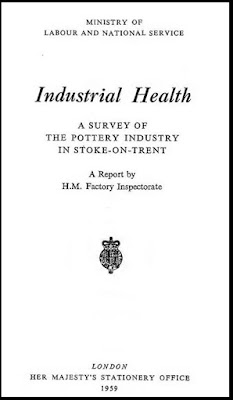 1964  The Potteries and the progression to a cleaner atmosphere

Part of a paper read by GE Earnshaw MRSH FAPHI, Senior Smoke Inspector, City of Stoke-on-Trent, to the West Midlands Division of the National Society for Clean Air at Stoke-on-Trent on April 22, 1964

"Most of the pottery manufactured in this country takes place in Stoke-on-Trent, and for at least 200 years it has been the staple industry of the district. Unlike many manufactured products, each stage in the preparation of raw materials, and in the manufacture of the article, needs heat treatment. The only fuel that was available and was capable of producing this heat was coal. The next largest industry in this district was coal mining, and whether or not the pottery industry settled here because coal with a high volatile content was available, it did provide ample and cheap supplies of coal.

The outlets or chimneys of the hovels surrounding the pottery ovens and kilns were no more than 25 to 60 feet high so the smoke, particularly during adverse weather conditions, filled the house yards and streets like a fog.

What the housewives thought of this on washing day, I don’t know.

Some 40 or more years ago (i.e. in the 1920s), it was probably true to say that the Potteries had no rival in Britain, or possibly the world, as far as its smoke was concerned.

This could be expected when one considers that at that time, grouped mostly in the confines of the six Potteries’ towns, there were at least 1,286 ovens, 829 kilns, 437 boiler chimneys and more than 1,987 chimneys serving other processes and heating appliances in connection with the 350 pottery factories.

In addition there were 14 brickworks, 12 tileries and 15 collieries each with chimneys in connection with boilers and ovens on the respective works.

"Firing a bottle oven - a profession in itself"

The firing of an oven was a profession in itself as there was so much at stake in the oven. Long experience was necessary as a few minutes carelessness could often mean ruin to the oven’s contents. The final temperature to be attained must be as even as possible throughout. The long flames produced by the high volatile coal are employed to carry the heat to the middle of the oven. Temperature rise must be controlled, as a satisfactory finished article depends on the time it is subjected to heat at varying degrees of temperature. When it is realised, in the case of the bigger ovens, that a ton of coal could be fed to an oven within the space of minutes, it can be appreciated how difficult it is to attain smokeless combustion.

Limits of black smoke emissions were fixed by the local authority both for boilers and ovens, although they had not the force of law, and records show that there were many prosecutions regarding smoke emissions from boiler chimneys. For ovens and kilns the limit was 10 minutes black smoke per baiting (a charge of coal). It was realised that it was impossible to avoid such emissions at certain stages of firing, but the excesses, due to carelessness and lack of maintenance of ovens, were dealt with by the Inspector."


Councillor Eric Gibbon was not at Mr Earnshaw’s presentation but offered some positive support on the content including the following:

“The coal required to burn in the old-fashioned intermittent kilns the amount of ware that is being fired in the new units (gas, oil and/or electric tunnel kilns), would be about 727,000 tons per year.

Against this the amount of coal used in the (town) gasworks and power stations to produce the refined fuels used on the new kilns is 473,000 tons per year, a direct saving of over a quarter of a million tons, as against an annual consumption of about 22,500 tons of oil." 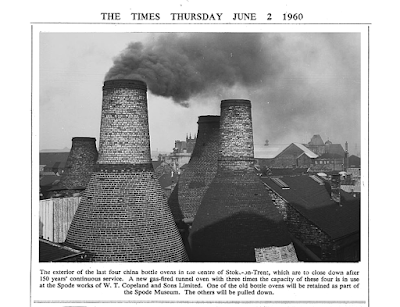 The demolition of this factory, just across the road from Gladstone Pottery Museum, caused quite a stir in July 1975. ATV television news recorded the event on film. The film was called 'A Present from the Past' and was broadcast on December 8th 1975. It was made by Donald Shingler, who was born in the Potteries and a distant relative of Arnold Bennett. The film gave  one of the first details accounts of the industrial heritage of the potteries and the efforts being made to conserve and interpret that heritage. The unique sequence from the film of the Bluebell Bottle Oven being demolished was made available to Gladstone Pottery Museum in the from of a series of prints.

Pam Bott (now a Woolliscroft) was working at the museum and took photographs to record the event and here are a few of them.

Images of the demolition of bottle ovens